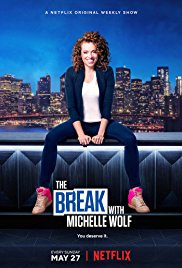 Michelle Wolf’s experience on late night comedy has served as a definite boost for her own debut. New episodes are out every Sunday on Netflix. Wolf speaks her mind freely and gets pretty weird at times with no worry about ads being pulled. She’s dissected the late night routine, kept much of the outline, but completely rearranged the segments.

If you’re a fan of The Daily Show but you haven’t seen The Break with Michelle Wolf, can you really consider yourself a fan?

Her pumped up Nikes and raging auburn curls are just a few things that set Wolf apart. Perfectly timed delivery and bold topics make this a show we haven’t quite seen before. Michelle Wolf uses a plethora of tactics that poke fun at American culture and society. She begins the show with a classic stand up routine then goes to “commercial” which are in fact fake ads made by Wolf and her team poking fun at commercial products in a ridiculous way. This is the kind of show that you can watch without taking seriously. Though there are a few political jabs thrown in, as it wouldn’t be a true Michelle Wolf show without them. 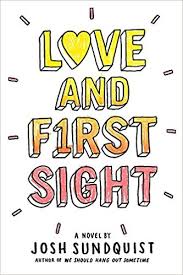 Will Porter, who is now sixteen, has been blind since birth. As a result, his parents have tried to protect him as best they can. He has been going to a school for the blind and visually impaired and spending his summers at blind camps for as long as he can remember. That all changes this year, when Will decides to start attending the local high school. He wants to be a writer, so going to a school with sighted students may be what he needs to get there.

When Will gets the opportunity of a lifetime, a chance to see for the first time, he is wary of all it entails. There are many possible risks for the procedure, but he has a good chance of being selected as a candidate. He must make the weighted decision to leave the life he’s always known in search of that he has always missed.

I loved this story, it was just the right balance of contemporary and seriousness. The romance wasn’t cliche and it was honestly something different, which I’m always looking for in young adult contemporaries. The characters served the plot well, while still holding their own as individuals.

I especially love the way they paint Will as a person who is more than just his disability. He is so much more than “the blind student.” He is a teenage boy who goes to the mall and homecoming and has a regular table at lunch where he sits with his friends. There were situations where Will’s being blind made things appear awkward, but he had a knack for making light of these. The humor really helped ground the character further. All in all, I give this a 5/5 Stars. 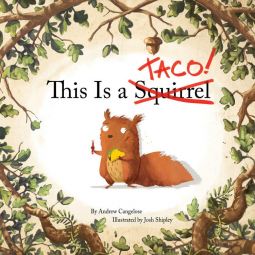 This book was the cutest thing ever! I loved the way Taco stole the show. It starts off with some actual squirrel facts, but when hawks enter the mix, Taco doesn’t like where things are going. So, he decides to put things into his own hands by rewriting the story. This is a wonderful conversation starter for your little leaders. 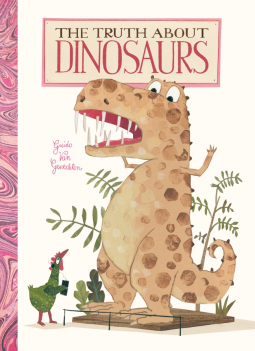 This is a story that takes it back. Waaaay back, to when dinosaurs roamed the Earth. With a little help from the dinosaurs closest living cousin, the chicken. Told in a photo album format, this story will have your kids (or students) cracking up (and I’m not just talking about the eggs). This is great gift for your favorite dinosaur lovers.

I received digital copies of these titles through Netgalley.com in exchange for an honest review.

In the second installment of The Incredibles, our focus is shifted to Elastigirl as she tries to make superheroes legal again. Mr. Incredible takes over watching the kids while Elastigirl uses her new suit and sweet ride to save the city from her newest foe, the Screenslaver.

Apparently she used to have a Mohawk, too.

I saw this movie twice in theaters. Once in 3D and the second time in 2D. I honestly preferred the 2D version to the 3D. I feel like you can better appreciate the art that way and the picture is so much brighter.

I would say that I enjoyed this film but it was incredibly over hyped (no pun intended). The nostalgia of getting this sequel after so many unanswered years really got the best of us. It had me expecting this amazing action film with drama and a gripping story line. At the end of the day, this is a children’s movie, and a great one at that. But that doesn’t mean it could ever live up to our over-inflated expectations.

What I would say? Take your kids, or cousins, or whoever out to see this film and they’ll enjoy it. It’s still a great movie, no matter how predictable. It does a great job of incorporating some modern technologies while still keeping that 60s look to the character styles.

As far as the characters themselves, I loved how we got to know more of Violet. She’s definitely changed for the better since the first film. She is ready to take action and save the day when her parents bite off more than they can chew. Dash plays the role of the annoyingly adorable little brother well. He gets into trouble easily but gets out of it just as quick. Jack Jack was a wonderful comic relief throughout the film. It was great to see the family’s reaction to Jack Jack’s powers. Frozone will forever be one of my favorite characters from this Pixar universe, despite his short-lived screen time. He is a great sidekick.

I just wanted an excuse to use this gif 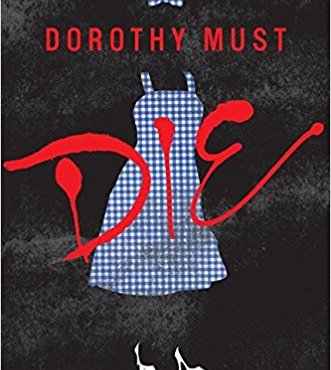 What if everything you know about Oz is wrong? What if Dorothy came back after clicking those heels? It turns out that Dorothy may not be as “good” as the story goes.

Amy Gumm is not having the best day. She’s just been suspended for her supposed fight with resident bully and mom-to-be, Madison Pendleton. Amy tries explaining herself to her mother, but she’s already on her way to a “Tornado Party” held at the local bar. That leaves Amy and Star, her mother’s pet rat, to brace the tornado together, but that’s not where things end.

The tornado whisks Amy and Star to Oz, but it’s nothing like the story. Oz is losing its magic, fast. Through a series of events that draw Amy closer to figuring out what happened to the Oz she’d once read about, she gets her mission. Oz is in trouble and only she can save it. The only catch is, to save Oz, Dorothy Must Die.

The world building and descriptions were vivid. It was an interesting take on a cherished story. I’m a fan of fairy tale retellings, I love the creativity that comes out of it. I enjoyed some of the characters but there were quite a few that were forgettable.

Amy was a layered character. I liked the backstory presented at the beginning of the novel. There were moments throughout the story where this was brought up and definite character development took place. She is someone who reacts far more often than she acts, which is also mentioned during her training. I hated how much she hesitated instead of completing whatever action she was doing. The story would’ve been over a lot sooner if she didn’t hesitate so much.

My main complaint is that I feel like Danielle Paige missed out on a great opportunity to add some diversity to the classic tale. As a woman of color, I wouldn’t have expected such a lack of diversity in characters. Pale skin and blue/green eyes seemed a little too common for my taste.

What were your favorite reads of August?
Are you ready for spooky season? How are you celebrating?
What are your most anticipated reads for September?
Have you gotten your copy of Redemptor yet?
Are you in school right now?
Do your friends ever ask for book recs?
Follow Rae's Reads and Reviews on WordPress.com
Loading Comments...