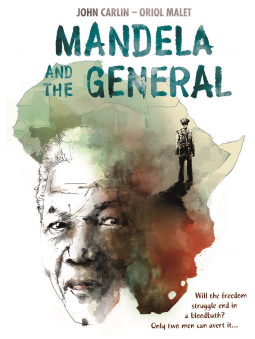 This was an interesting take on the battle that took place for the heart of South Africa. The story follows General Constand Viljoen and his conflicts as the leader of the white nationalist militias that have been bound as one upon Nelson Mandela’s release from prison. Mandela is gaining followers rapidly, causing fear to rise among white nationalists. Together, Mandela and the General form an alliance aimed toward achieving peace through nonviolent negotiations.

I enjoyed the illustrations, they were beautiful. I wasn’t expecting to be shown this story from the point of view of history’s villain. Through the eyes of his privilege, I could see how some of his decisions could make sense to him. It was an uncommon take that I’ve been seeing a few other novels move toward, as well. Overall, an interesting read.

I received a digital ARC of this novel through Netgalley.com