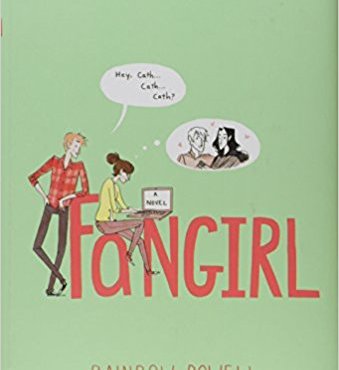 Cath is a Simon Snow fan.

Okay, the whole world is a Simon Snow fan…

But for Cath, being a fan is her life—and she’s really good at it. She and her twin sister, Wren, ensconced themselves in the Simon Snow series when they were just kids; it’s what got them through their mother leaving. Reading. Rereading. Hanging out in Simon Snow forums, writing Simon Snow fan fiction, dressing up like the characters for every movie premiere.

Cath’s sister has mostly grown away from fandom, but Cath can’t let go. She doesn’t want to.

Now that they’re going to college, Wren has told Cath she doesn’t want to be roommates. Cath is on her own, completely outside of her comfort zone. She’s got a surly roommate with a charming, always-around boyfriend, a fiction-writing professor who thinks fan fiction is the end of the civilized world, a handsome classmate who only wants to talk about words… And she can’t stop worrying about her dad, who’s loving and fragile and has never really been alone.

For Cath, the question is: Can she do this? Can she make it without Wren holding her hand? Is she ready to start living her own life? Writing her own stories?

And does she even want to move on if it means leaving Simon Snow behind?

Overall, Fangirl had its highs and lows. I listened to the audiobook and there were a lot of chunks where I was starting to get – dare I say it – pretty bored. Especially around the middle. There were times when I just didn’t care about what was going on with Cath. I didn’t like most of the supporting characters. I hated Wren until three fourths of the book in. Reagan was a total mess and I still don’t completely get her. There was just a lot going on with characters I didn’t care for so I probably zoned out for a chunk of this.

I give this an eh as far as racial diversity goes. It was set in Nebraska so I get that most of the main characters were white, but the only diversity seemed to be Cath’s old neighborhood and and a few other Latinx people thrown in. Again, this is probably due to the setting of the book. I haven’t personally been to Nebraska so I honestly don’t know.

I definitely give Rainbow Rowell props for including mental health in this one and the ways Cath, Wren, and their father all tried to self-medicate whether it be writing, drinking, or exercise.

I can see how this could appeal to a subset of readers, but I don’t think I fell into the target audience. I’m not into fanfiction and I am definitely a lot more extroverted than Cath. It’s not a bad book, I just don’t think it was for me.

There was a definite portion in the middle where I felt a strong lull. I wasn’t really feeling the story. It felt like a drag. The turning point got me back into the story. I feel like I enjoyed the beginning portion and the ending quarter of this novel most. The middle didn’t really do it for me.

There were only two characters that I really enjoyed from beginning to end and those were Cath’s dad and Levi. I understood how the girls leaving could be such a trigger for him. That scene was one of the things that really got me back into the story and made me want to keep going.

I absolutely loved Levi, even after he screwed up. He’s just so bubbly and wonderful. He’s the character I sided with and cared about the most throughout this book. I’m just too much of an extrovert not to.

I started feeling like the story was dragging way too long until Levi and Cath started their relationship. The line that really got me was when Levi said he was starting to fall in love with Cath, as if he wasn’t already. That was so cute!

What are your spooky season book recs? Have you read any of these?
Did you know October is Down Syndrome Awareness Month?
What was your favorite read of September?
What’s a series you’d recommend?
What are your most anticipated releases for October? Are there any upcoming releases by BIPOC that I missed?
What are your favorite children’s books?
Follow Rae's Reads and Reviews on WordPress.com
%d bloggers like this: