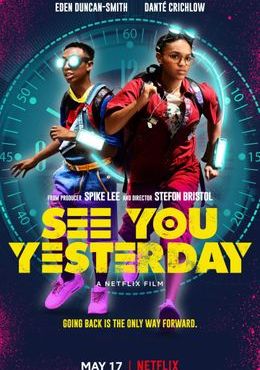 See You Yesterday is the latest film in Spike Lee’s growing work with Netflix. Spike Lee was the producer and the film is directed by Stefon Bristol.

The story centers around a pair of Brooklyn teenagers who have basically invented a way to time travel. CJ and Sebastian are working on improving their invention, but before they can master it, CJ’s brother Calvin is murdered. CJ convinces Sebastian to help her try to save Calvin, despite the risks.

I love the representation of various cultures. Sebastian’s family is from Guyana, the boy who got shot before our story begins was Haitian, Eduardo is Dominican, and the list goes on. The diversity of Brooklyn was very well portrayed.

I also loved the fact that the black nerd trope was given much more depth in this film. Sebastian wasn’t the supporting Urkel and the science jargon actually made sense. Sebastian was definitely my favorite character, I could really relate to him.

I feel like the issue of police brutality was well addressed and I’m happy they made a point of including violence in the community, as well. The situation felt so real, like something I could see happening on the news. The science fiction blended with reality very well.

What I wanted more of

I wish there was more character development. We really only got to see glimpses of their lives. I feel like that in itself was intentional, but I wanted to see much more. It was definitely a more plot-driven narrative.

I liked CJ’s intentions, but I didn’t like how she went about it. A lot of her actions were questionable. Her character develop was far more pronounced than the others, since the story does focus on her situation. I wasn’t a fan of the end and that’s all I have to say about that.

Overall, I think See You Yesterday is a great film exploring the issues of police brutality and violence with a Sci-Fi twist. It’s definitely outside the box thinking. I would highly recommend everyone watch it.

Have you seen See You Yesterday?

What are your thoughts?

What are you currently watching?