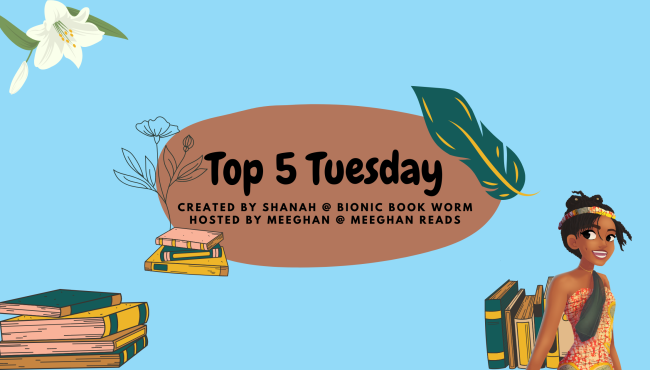 Top 5 Tuesday is a weekly meme hosted by Shanah of the Bionic Book Worm. I’ve been following her blog for a while and you probably should, too. She’s a great book blogger and super sweet.

I’ve come to realize that most of the stories I read are plot-driven, so I don’t always notice characters themselves. I also tend to read more serious stories, so the funny characters tend to fall through the cracks.

Nevertheless, I’m determined to make it a full five.

Joop and Coop in Odd One Out

Odd One Out was one of my Reading Rush reads this summer. I chose it in the spur of the moment, mostly because it was available and I saw Nic Stone’s name. I’m happy it made it’s way into my TBR.

These two separately are funny, together they are straight up hilarious. I was originally going to put them separately just so I could have a full list, but then I realized that wouldn’t be doing the pair justice. Jupiter and Cooper salvaged this book for me. I really couldn’t stand Rae. Joop and Coop made it worth finishing, especially hearing them in audiobook form.

Percy Jackson in The Lightning Thief

It’s been at least seven years since I read this but I still rave about the series to this day. Percy is so so funny and I’m thankful he was a character I was introduced to at a young age.

Monty in The Gentleman’s Guide to Vice and Virtue

This was another audiobook. I absolutely loved Monty. He needs to be protected at all costs, even if most of the situations he’s in are his own doing.

There wasn’t any one character that I could pinpoint as being hilarious, but more so their interactions with one another. Especially towards the end, they were a riot.

Will in Love and First Sight

I can’t believe I didn’t think of this one right away. I had to scope through my Goodreads to find a number five. Truth be told, Will was hilarious. He had a great way of looking at his situation and turning it into something comedic, which I love. You can definitely see how Josh Sundquist fit his own humor style into this one.

What would your picks be?

What’s on your TBR for this week?