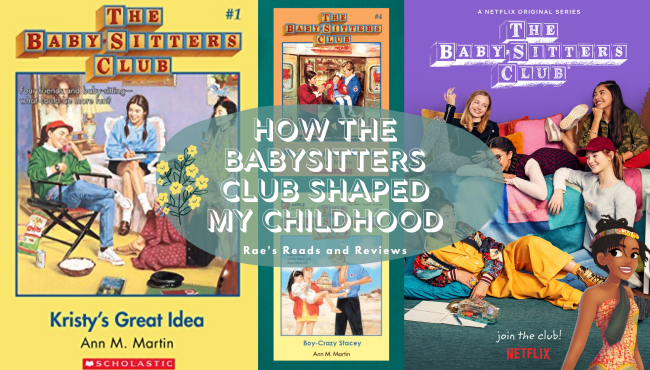 Hello friends, today I want to tell you a story. Get your snacks ready, we’re going to be talking about The Babysitters Club.

The Babysitters Club has been rebooted by Netflix and I’m here for it. Growing up, I LOVED reading The Babysitters Club. Every time my mom would take me to the library, those were the books I’d look for. It’s one of, if not the, first book series I started collecting.

My old library used to have a cart near the back where they would sell books for 50 cents. My mom would let me buy two a week on the condition that I would finish them before buying more. I always finished them within the week.

My goal was to read every one of those books. I honestly don’t remember if I ever did, but I’m sure I got pretty close. I was obsessed with the series and it taught me a lot growing up.

I never had sisters or other girls near my age in my family. All my cousins at the time were boys. I wasn’t allowed to have friends over and I only talked to them at school. All I really had were my books.

The Babysitters Club taught me about healthy friendships, conflict resolution, Type I Diabetes, and boys. Even though they came out in the 80s and 90s, they were a staple in my classroom and library shelves.

I put off watching the series reboot when it first came out because I knew it was something I wanted to give my whole attention to. If I put a show on in the background, I won’t catch the cinematography. I also tend to get super distracted so I’d probably miss out on the plot too. When there’s a show or movie I really want to watch, I set up a full block of time to give it the attention it deserves.

I watched The Babysitters Club on Netflix this past week and LOVED it! It brought up so many memories and I feel like the show really did the book justice. The casting was perfect, the acting was top tier, and the writers did a great job of bringing in modern issues. I really liked how they made Mary Anne biracial and brought in more modern issues. There was even LGBTQ+ rep.

My younger cousins actually watched it too (they haven’t read the books though) and they also loved it. It definitely feels like an all-ages kind of show.

Netflix also put out The Claudia Kishi Club, which is a short documentary (only 17 minutes long) that shows how Claudia Kishi’s character impacted Asian Americans readers growing up in the 80s and 90s. The people in the documentary went on to be artists, writers, and one of them worked on the actual Netflix reboot. It just reinforces how powerful and important representation is.

All this to say, I’m so thankful to have had books like The Babysitters Club to keep me busy growing up. If you haven’t seen the reboot yet, take this as a push to start it.

Have you watched the new Babysitters Club reboot?

What books shaped your childhood?

Have you read any of The Babysitters Club books?

6 thoughts on “The Babysitters Club Shaped my Childhood…. and Possibly Yours”